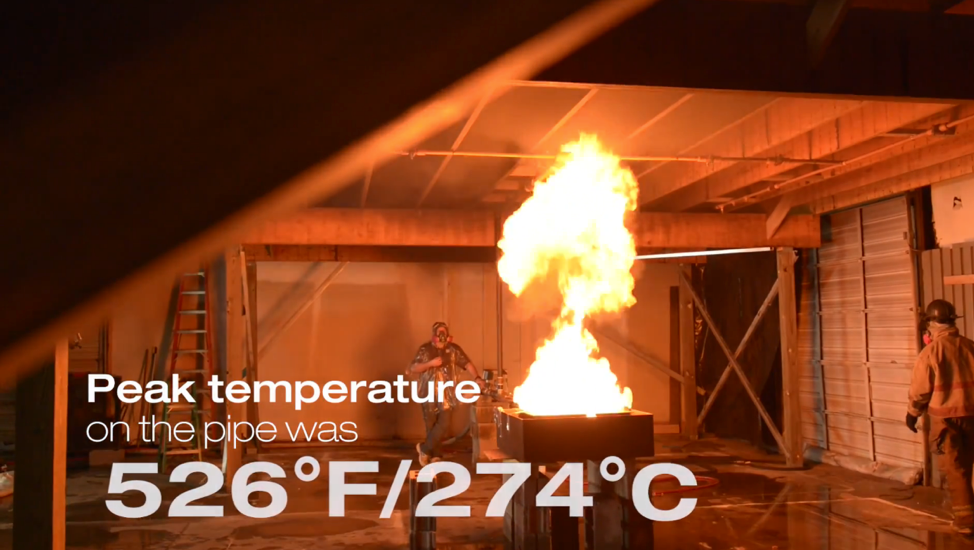 Why Use CPVC for Fire Sprinkler Systems?

One of the most common myths in the fire protection industry is that because CPVC is plastic, it will easily melt in a fire.

However, tests prove that unlike other plastics, CPVC can withstand high heat and intense flame well enough to reliably deliver water when installed per its listing limitations.

Why Do Some Plastics Melt?

Some plastics, like polypropylene are semicrystalline.That means they are composed of very flexible, mobile molecules, held together in places by polymer crystals. Once the melting temperature of the crystals is reached (about 320°F/160℃ for polypropylene), the material becomes liquid and flowable like candle wax.

Because materials like polypropylene are also composed entirely of hydrocarbons, which are an excellent fuel, this liquid flowability of the material at high temperatures can result in flaming drips of plastic, with the potential to spread the fire even further.

Why is CPVC different?

CPVC is different because it is a rigid amorphous plastic. That means that it is composed of a tangled network of molecules which are immobile and locked in place. It doesn’t depend on crystals to hold it together, so it never reaches a “melting point” where it becomes liquid and flowable. At high temperatures in a fire, the molecules become somewhat more flexible, but never reach the point of liquid flowability.

In addition, when exposed to fire, the chlorine molecules cause a charring layer to form around the outside of the pipe, which helps to insulate the interior piping material.

Since chlorine is a fire retardant, CPVC will not sustain burning and has a high limiting oxygen index (LOI) of 60. LOI is the amount of oxygen that’s required in the surrounding atmosphere to sustain combustion. For reference, the earth's atmosphere is 21% oxygen.

The chlorine atoms also help limit the amount of smoke production, potentially cutting down on smoke damage to property compared to another material.

How Does CPVC Stand up to a Flame?

To be approved for use in light hazard applications, BlazeMaster® CPVC has undergone rigorous testing to ensure that it can effectively and reliably extinguish a fire in the face of intense heat and flame.

What is CPVC’s Material Classification?

BlazeMaster CPVC has achieved a number of listings—such as UL 1821, shown above, which certifies it for light hazard occupancies.

Another notable classification is the common European Fire Classification for fire resistance test, where BlazeMaster CPVC achieved the highest possible ranking for a non-metal material.

The materials were ranked in three categories:

See other important listings and approvals received by BlazeMaster CPVC.

CPVC hasn’t only performed well in tests—some of its most impressive performances have been in real, life-or-death scenarios.

For example, in 2006 a fire nearly broke out in an old apartment building in Norway when a sofa caught fire. Luckily, the building owners had invested in a BlazeMaster CPVC fire protection system just months before. The system activated and effectively extinguished the fire, limiting the potential damage and keeping all 40 residents unharmed.

Make The Investment in Safety and CPVC

These tests and experiences go to show the reliability of BlazeMaster CPVC systems. Even in the most intense of fires, it proves as reliable as traditional steel systems, if not moreso.

There are many other characteristics that make CPVC the material of choice for expert builders and contractors. You can learn about some of them by checking out the resources below.

Additionally, you can get in contact with our team of piping systems specialists at any time for expert guidance.