Tight Construction Schedules Are No Problem For Affordable Fire Protection 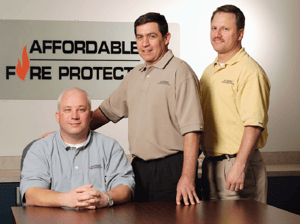 Affordable Fire Protection, Inc. (AFP), one of the largest fire sprinkler contractors in the Southeast, promotes itself as having been an early adopter of BlazeMaster Fire Protection Systems, and for good reason. With more than 200 employees installing, on average, 200,000 sprinklers each year, the rapidly growing company has its hands full with a broad range of multi-family, high-rise and light hazard projects – each with its own tight construction schedule.

"No one can afford to wait on an installation that is behind schedule," said Milton Crosswy, president of AFP. "Apartment managers have tenants waiting to move in, university dorms have class schedules to keep, and builders have contract terms they must meet. It’s simply not acceptable to get behind in this business."

To help protect its reputation for on-time installations, AFP made the decision to switch a majority of its business to BlazeMaster® CPVC piping. Project after project has proven to AFP management that a BlazeMaster CPVC installation can meet schedules not attainable with steel.

"We recently finished a college dorm project which originally specified steel pipe," said Crosswy. " After reviewing the specs of the project, we decided there was no way to meet the deadline using steel, so we recommended the use of a BlazeMaster CPVC fire sprinkler system, and the project was finished right on time."

Crosswy estimates that on some projects the labor time savings is as much as 30 percent using BlazeMaster pipe and fittings.

With nearly 70 percent of its business coming from residential applications, AFP has installed thousands of sprinklers in wood frame construction since its founding in 1986.

Crosswy also credits the lighter weight of BlazeMaster CPVC pipe as adding to the total time and labor savings.

"It’s easier to maneuver on the job site," he added. "And even more important, especially in a retrofit, it’s faster and easier to clean up. There’s no mess on the ceiling or walls because, unlike steel, there is no need for cutting oil and threading devices. The pipe and fittings are quickly and neatly joined with a one-step solvent cement bonding system."

Safety and Quality Over Speed

Yet, in the fire protection business where safety is as critical, if not more than speed, Crosswy is quick to point out that his company’s decision to switch to BlazeMaster CPVC pipe and fittings more than ten years ago was also based on quality and reliability issues.

The company’s commitment to quality is a major reason for its large referral business. AFP has received numerous industry and contractor quality and construction excellence awards throughout the years. Its apprentices have been recognized for quality workmanship by taking top awards at the prestigious ABC national competition, as well as various AFSA contests.

Management at AFP works to continue reinforcing the company’s leadership and quality image by taking an active role in industry education. Within AFP’s ranks, there are instructors for the American Fire Sprinkler Association (AFSA), as well as the Georgia Sprinkler Association. In addition, management representatives also hold leadership and teaching positions with the Construction Education Foundation of Georgia (CEFGA) and CEF of the Carolina’s.

"Our primary goal is to deliver a solid product to our customers. We tried other CPVC products, but there were quality control issues," Crosswy said. "The manufacturers of the BlazeMaster system stand behind their product, and they’ve done so for more than 20 years. That’s important to us. Their quality assurance program ensures the product meets our high standards. The company has additionally spent the time and money to secure more Listings so their product can be used in more applications than any other non-metallic pipe in the business."

Also important to AFP from a quality standpoint is the fact that a BlazeMaster CPVC system offers better flow characteristics which can allow for a downsize in pipe size compared to steel pipe. And, since BlazeMaster fire sprinkler pipe and fittings are immune to the effects of MIC (Microbiologically Influenced Corrosion), it offers a longer, low-maintenance service life. In his nearly 20 years with AFP, Crosswy has seen a number of metallic piping system failures in the field directly attributed to MIC.

Crosswy and his team also value the tremendous service and training support offered by the BlazeMaster CPVC team.

"We have called upon their field service reps more than once to make joint presentations with us to engineers and building owners regarding the benefits of CPVC," Crosswy said. "Working together, we have successfully converted projects to CPVC based on the total installed cost savings."

In today’s global market where the scarcity of copper and other metals has caused skyrocketing prices, a BlazeMaster piping system offers significant material cost savings, in addition to labor savings. Over the past year, AFP has bid on several projects where steel costs were twice that of CPVC.

"As a result of the cost differences, the issues with MIC and tight construction schedules, there are a number of applications where we have declined jobs using steel entirely and insist on a BlazeMaster CPVC installation," noted Crosswy. "I fully expect that as we grow, so will our use of BlazeMaster fire sprinkler systems. It helps us look good to the people and companies we serve."

To learn more or schedule a time to discuss how BlazeMaster CPVC can help with your fire protection application, contact one of our piping systems consultants.