Why Is BlazeMaster® Flame Resistant?

It’s widely known that resistance to heat and flame is a primary advantage of CPVC over other thermoplastics. BlazeMaster maintains its structure and continues to hold internal water pressure when directly exposed to a flame to ensure sprinkler water will reach and extinguish a fire.

But did you ever wonder why BlazeMaster has these qualities? Let’s explore some of the science on this important topic.

We’ll start with the simplest answer: BlazeMaster is inherently flame-resistant because it has extra chlorine compared to PVC, and especially non-chlorinated polymers like PEX or polypropylene. That gives BlazeMaster a different molecular structure that enables it to withstand very high temperatures. In a UL test, BlazeMaster was exposed to a fire plume between 698° and 901°F (370° and 483°C) and continued to perform.

To understand more about why BlazeMaster has an advantage on flame resistance, it helps to know the chemistry behind fire. When you try to start a campfire, oxygen becomes super-activated by the flame. This sets off a reaction that causes the wood to break down into little pieces and send off volatile gases.

If you look closely at a fire or a candle, you’ll notice the flame appears slightly above the wick or wood. That’s the volatile gases that have been released and are catching fire. It’s the burning volatiles that create the flame. As more volatiles evaporate off, the cycle repeats itself. The heat from the fire keeps breaking down the material and activating the oxygen so volatiles keep catching fire.

Different substances require different amounts of oxygen to sustain a fire by itself. Wood burns easily so it requires a relatively low amount of oxygen – considerably less than the 21% that is naturally occurring in the air we breathe. By comparison, BlazeMaster requires 60% oxygen in the atmosphere to sustain a flame.

The Key Element for Flame Resistance

Understanding the flame resistance of different thermoplastics like PVC and CPVC comes down to chlorine: PEX and polypropylene have no chlorine, and PVC is about 57% chlorine, while CPVC is about 67.5%. As a result, the materials have different molecular structures – and that makes all the difference in how they respond to heat and flames. Equally important, that chemical structure gives CPVC a significant environmental advantage over steel pipe.

When you burn something without chlorine in its structure, like wood, PEX, or polypropylene, it easily breaks down into volatile gases and burns readily.

With PVC, the chlorine atoms are arranged in a sequence that keeps repeating in a regular pattern along a “backbone” (see Figure 1). Every other point on the backbone contains a hydrogen or a chlorine atom. When heated, the repeated sequence allows the hydrogen and chlorine to pop off in a chain reaction like opening a zipper (the scientific term: “zipper dehydrochlorination”).

As the molecules “unzip,” the chlorine released actually deactivates the oxygen. As a result, more oxygen is needed to keep a fire going. It also creates an “unsaturated” structure on the polymer backbone, which allows the molecules to tie together, or crosslink, instead of putting off volatile gases. Crosslinking promotes the formation of char, which acts as an insulating layer for the rest of the pipe.

By contrast, the extra chlorine in CPVC creates a different, irregular molecular structure. As shown in Figure 2, at some points on the backbone the hydrogen has been replaced by chlorine. These points slow the zipper effect – it happens only in small sections at a time. This promotes better crosslinking, which means the material chars better than PVC and creates less volatiles – and less smoke. There are even less volatiles produced – and even more, oxygen is needed. 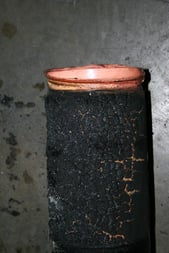 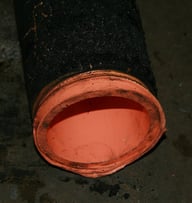 CPVC forms a charring layer when exposed to a flame. While charring forms on the outside of the pipe, the interior stays smooth to keep water flowing.

The chemistry behind BlazeMaster CPVC has enabled it to achieve the best possible fire protection classification of a nonmetal material. It results in:

These are all reasons BlazeMaster CPVC offers superior protection for people and property It’s the right choice for your next project.