For 30 years, BlazeMaster® Fire Protection Systems have been specified for thousands of residential and commercial buildings around the world. But why are building owners and contractors choosing a thermoplastic fire sprinkler system over steel and other non-metallic materials?

To answer that question, we need to briefly explain BlazeMaster CPVC’s decades of innovation, validation and proven performance.

A New Type of Thermoplastic

In 1959 Lubrizol (which was then BFGoodrich) commercialized a new plastic, chlorinated polyvinyl chloride (CPVC). The brand was called Hi-Temp because of its unique ability to withstand extreme heat and pressure, unlike other plastic materials.

In addition, Lubrizol’s CPVC produced less smoke than other plastics and had a very high limiting oxygen index (LOI) of 60, requiring 60% oxygen to sustain a flame.

While originally introduced to the market as a potable plumbing solution, Michelle Knight, an R&D scientist at Lubrizol for nearly 30 years, recalls how the early success of CPVC made them think they could successfully expand into the fire sprinkler market. “We knew we had a strong, capable material, and we knew we could do more with it.”

So the product engineers at Lubrizol began to refine the material for fire sprinkler systems ─ launching BlazeMaster Fire Protection Systems in 1984.

Because BlazeMaster Fire Protection Systems was the first to introduce a plastic material to the fire sprinkler market, many of the tests that exist today to ensure the performance of thermoplastic systems weren’t in place.

Our product and engineering team worked closely with Underwriters Laboratories to develop a series of tests that effectively gauge a plastic piping materials ability to reliably work when exposed to extreme heat and flame. The current UL 1821 fire test was developed from our work with UL. 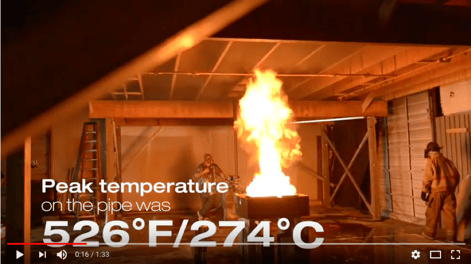 BlazeMaster CPVC passed this and multiple other tests to earn our UL listing.

As the world’s leading advocate of fire prevention, the National Fire Protection Association (NFPA) is an international organization with a mission to reduce the burden of fire and other hazards on the quality of life.

BlazeMaster Fire Protection Systems have long been an approved solution for residential and commercial buildings and retrofits around the world and meet standards from these major international agencies:

It has taken BlazeMaster CPVC time and effort to get it to where it is today. When the material first came to market in 1984, it overcame initial negative perceptions to stake its claim in the fire protection industry, proving it was a more reliable solution to steel.

Industry-leading research, development and testing over the course of the 1980s allowed it to demonstrate it could provide superior smoke and flame characteristics, sustain combustion and resist corrosion to the chlorine utilized to treat water supplies.

It was near the end of the 1990s where the price of steel piping began to surpass that of CPVC. That, combined with the labor savings through its simplified installation process, BlazeMaster was and still is able to offer a total, cost effective value that steel just cannot match.

Heading into the 2000s, it developed the first and only pressure-rated fittings compound and became the first UL Listed CPVC system for use in exposed residential basement applications. It also introduced the FBC™ System Compatible Program, allowing installers to quickly and easily reference chemical compatibility of ancillary products with BlazeMaster CPVC pipe and fittings.

It is one major innovation after another that has allowed BlazeMaster CPVC to be relied on by thousands of light hazard construction projects across the globe such as:

BlazeMaster CPVC Fire Protection Systems is the most specified non-metallic fire sprinkler system in the world.

Readily available through a number of partner manufacturers, choosing a BlazeMaster CPVC system means reliable, problem-free fire protection for a lifetime. It also means having access to unrivaled and expert technical support and on-site and free online installation training.

To learn more about BlazeMaster CPVC Fire Protection Systems or for questions, contact our team of piping systems consultants.