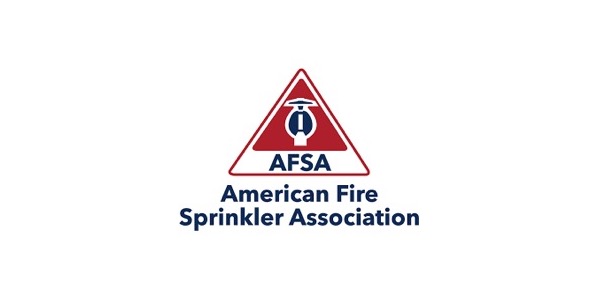 Homes for Our Troops (HFOT) is a publicly-funded 501(c)(3) nonprofit organization that builds and donates specially adapted custom homes nationwide for severely injured post-September 11th veterans to enable them to rebuild their lives. Most of these veterans have sustained injuries including multiple limb amputations, partial or full paralysis, and/or severe traumatic brain injury (TBI).

BlazeMaster CPVC pipe and fittings are donated to AFSA HFOT homes through our manufacturing partner, Viking.

Providing Shelter for Those Who Provided for Us

HFOT builds homes that are specific to the veteran who will be living there, so all of the homes are built with adaptions, such as low countertops, wide hallways and entryways, and ramps. However, each house is based on one basic floor plan, which is 3,400 ft2 including the garage. This makes the fire sprinkler design for these homes fairly simple, which makes it a great incentive for AFSA members to get involved.

The HFOT process works like this: veterans in need tell the organization where they want to live, and HFOT sends a survey team to find a good location for the home within that city or town. Local contractors are then identified and asked to donate their labor and materials toward building the home. Many U.S. contractors understand the sacrifice that these veterans have made, and they are eager to donate their valuable resources to the cause.

AFSA members who would like to get involved with a HFOT project should reach out to PE&A Staff Liaison Nicole Duvall at nduvall@firesprinkler.org, who works closely with PE&A Committee Member Paulene Norwood, the volunteer coordinator for all HFOT homes. She can be reached at paulenesacvalleyafsa@gmail.com. They have a master list of projects and work to match volunteers with projects.

Anyone who works on a HFOT is expected to treat it like any other job. All materials and labor are provided free of charge. There are three community events surrounding the construction of each home – Community Kick-Off, Volunteer Day and Key Ceremony, and all partners are invited to attend these events. A company that participates in an HFOT home construction project is also free to publicize the fact that it has been involved via its marketing and social media efforts.

If you are interested in supporting HFOT via a cash donation, please visit www.hfotusa.com to do so.

Marine Sergeant Joshua Bouchard lost his left leg and broke his back in Afghanistan after his vehicle drove over an IED in 2009. He became the much-deserving recipient of a HFOT house equipped with an AFSA-member installed fire sprinkler system in July 2018. The decorated veteran says knowing that his new home is protected by fire sprinklers provides him a great sense of security. “The sprinkler heads blend in so well I can’t tell that they are even there,” says Bouchard. “It gives me a peace of mind that I have more time to get out of the house.”

And this past January, Army Cpl. Kevin McCloskey received a mortgage-free home in Southampton, Pennsylvania equipped with a residential fire sprinkler system. Cpl. McCloskey lost both of his legs as well as the vision in his right eye, received burns all over his body and suffered a traumatic brain injury in a 2008 incident in Afghanistan as the vehicle he was driving struck an IED. “It’s huge, not only for the veterans but also for their loved ones knowing they have a safe place to live,” he said. "It’s a definite reassurance knowing that the sprinklers could be the difference between making it out and possibly salvaging some belongings,” said Bridget McCloskey, who has known her husband since they were in first grade together. “For me, I can just jump up and run out of the house, but for Kevin, things take him a little more time. It’s an added layer of protection, especially if I’m not home. I know that no matter the circumstances the house gives him every advantage of being safe, especially with the sprinkler system.” 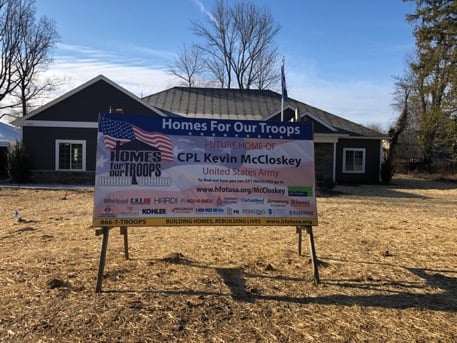 BlazeMaster Fire Protection Systems salutes all U.S. veterans who have given so selflessly to keep all of us safe. Won’t you join us by helping to keep veterans in need safe as well? Support HFOT through AFSA.