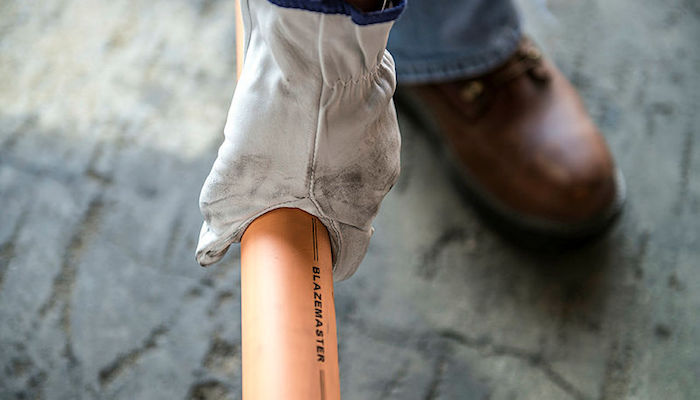 Millions of homeowners across the United States have come to rely on Ron Hazelton for down-to-earth, practical advice. As the on-air Home Improvement Editor for ABC TV’s Good Morning America and star of the hit syndicated show HouseCalls, Hazelton has guided do-it-yourselfers for years through the ins and outs of countless home renovation and maintenance projects.

Yet in spite of the wide array of subjects he covers, Hazelton remains a tireless advocate for home fire safety and prevention. "As spokesperson for the National Home Fire Sprinkler Coalition, I have witnessed several demonstration house burns with and without fire sprinklers," he said. "I’ve long been convinced that sprinklers provide the ultimate in home fire protection."

Acting on this belief, Hazelton retrofitted his newly purchased home in Connecticut with a BlazeMaster® CPVC fire sprinkler system and, in doing so, helped to spread the word about the many benefits of this advanced fire protection system.

Upon learning of Hazelton’s purchase, the HFSC approached him with the idea of using his house as the model for this video.

Hazelton quickly agreed to participate. As he recalled, "Our home is a center entrance colonial, and our young daughter’s bedroom is on the opposite side of the stairwell from our bedroom. I recognized early on that a first-floor fire could quickly fill that stairwell with smoke and flame and cut us off from our daughter. Sprinklers will prevent that from happening."

Once Hazelton’s involvement in the video project was secured, HFSC turned to P&J Sprinkler Company and David Walencewicz to install the system. Walencewicz, the company’s president, is an established Connecticut sprinkler contractor with an impressive portfolio of retrofit work throughout the Northeast United States.

Through his many years of field work, Walencewicz has become an active proponent of CPVC, especially in retrofits. As Walencewicz explained, "Back around 1990, we were utilizing copper piping and we did quite a bit of residential retrofit work – specifically in attic areas. It just was not very safe to be thinking about soldering joints up there, so knowing that CPVC pipe and fittings can be solvent cemented, I welcomed it with open arms."

According to Walencewicz, a BlazeMaster CPVC fire sprinkler system offered the superior, reliable performance sought by Hazelton, and it also featured simplistic engineering. Highly durable and lightweight, BlazeMaster CPVC systems have also been proven to exhibit excellent impact resistance and natural immunity to corrosion and MIC (Microbiologically Influenced Corrosion). However, the primary benefit demonstrated during filming of the Hazelton retrofit video was its ease of use and speed of installation.

Key to the tremendous time savings demonstrated in the HFSC video is the fact that BlazeMaster CPVC fire sprinkler systems can be engineered quickly, requiring only simple hand tools, so fabrication, changes and alterations can all be made on site.

"The first day on a residential job such as Ron’s, you can pretty much bring all the BlazeMaster system materials with you," Walencewicz said. "Your pipe and fittings are all there, and it’s no problem carrying it since it weighs so much less than copper. The other thing that’s nice – particularly in residential retrofits like this one – is that the pipe and fittings are clean. If you’re going into someone’s house, you’re not going to leave a mess, and that keeps the homeowner happy!"

The BlazeMaster CPVC system employs a solvent-cement joining system, which eliminates the need for torches or heavy equipment. "I’ve been a home improvement, do-it-yourselfer for a long time, and I’ve done my share of pipe fitting with both copper and plastic" said Hazelton. "This process seemed pretty straightforward to me."

As the week-long video filming progressed, Hazelton grew increasingly grateful for the BlazeMaster system’s minimal impact on his home’s structural elements. "We only had to open five wall bays in the first floor," he said. "The walls are half-inch drywall and were easily patched. The second floor was accessible through the attic."

Additionally, Hazelton was pleasantly surprised about the system’s subtle appearance throughout his home once installation was completed. "All of the second floor bedroom heads are flush mounted in the ceiling," he said. "However, in order to avoid opening up the ceilings on the first floor, exposed heads were installed in the walls. At first, I was concerned that I might find these objectionable, but quite honestly, I’m not even aware now that they are there."

"At times, some customers will ask me about the differences between steel and CPVC systems when I suggest the latter," Walencewicz said. "But these days, more people are learning about the benefits of CPVC pipe and fittings and actually request it over steel."

For Hazelton, installing a BlazeMaster fire sprinkler system strengthened his commitment to promote home fire safety and prevention to Good Morning America and HouseCalls viewers. And as a homeowner, the peace of mind that fire sprinkler protection provides to him is invaluable.

"My worst fear is being cut off from my daughter in a night fire and not being able to go to her aid," he said. "I know from a great deal of experience that sprinklers will suppress and usually put out a fire before it becomes life threatening. This is why I have it, and I would absolutely recommend fire protection systems to other homeowners."