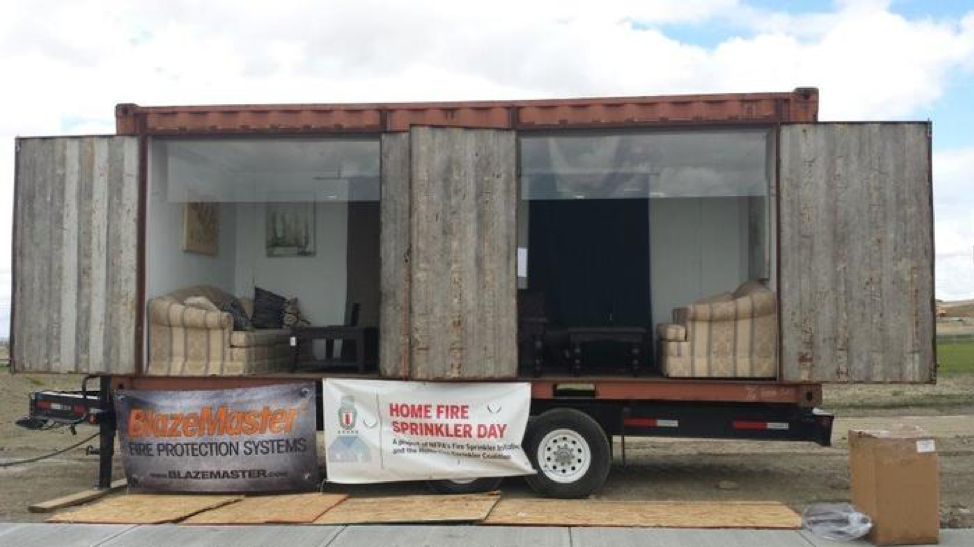 Livingston, a 15,000 living unit community in Alberta, Canada, is believed to be the largest community in North America to make residential sprinklers a standard feature in all homes from its inception. A recent demonstration shows the community why fire sprinkler systems are so vital and why others should follow suit.

In Canada, it is not a requirement that residential buildings be sprinklered, but sprinklers could be an alternative solution to meet some fire safety requirements. For example, in Alberta, you can’t build a community more than 10 minutes away from an urban fire station. However, fire sprinkler systems were considered to be an acceptable alternative solution because they contain fires and give emergency responders more time to arrive on the scene.

This was the solution implemented by the developer of the Livingston community, Brookfield Residential. When construction began this was no longer the case and Brookfield followed through with their commitment to protect every building in Livingston with fire sprinklers. They believe in the importance of fire sprinkler systems and decided that the entire community would be protected by them.

The average price of a home in Canada hit a new high in March of 2018, reaching a benchmark of $652,400. Real estate prices are continuing to rise; it is not uncommon to see small homes selling for $700-800K. Developers are conscious of the rising living costs and try to save homeowners money, which is why even the relatively small cost of a fire sprinkler system is often met with pushback.

Brookfield partnered with BlazeMasterⓇ Fire Protection Systems and TROY Life and Fire Safety to demonstrate for the community why fire sprinkler systems are vital for safety and well worth the small investment.

The demonstration included a planned blaze in a side-by-side trailer staged to represent homes. One room had a residential fire sprinkler system and the other did not. The couches were ignited one at a time, to simulate a common fire igniter, such as a cigarette. In each case, it took about 22 seconds for the smoke alarms to trigger.

This provided many new insights for homeowners. The demonstration busted the myth that fire sprinkler systems dowse your entire home in water, creating undue water damage. Homeowners saw first-hand how the sprinklers are triggered by heat and are designed to limit damage while giving homeowners time to escape before the fire department arrives.

Homeowners could also see how their home design will not be compromised by the presence of a fire sprinkler system. Flat concealed sprinkler heads blend into the ceiling, so homeowners aren’t paying for something they find unsightly.

Homeowners were blown away by the demonstration and the impact a nearly invisible feature has on the safety of their loved ones. Seeing the difference between the two rooms left a permanent image in the minds of the families and created a new sense of appreciation for the fire sprinkler systems.

“The BlazeMaster Fire Protection System is the most cost-effective method to sprinkler a home, and new technologies made this possible,” explained Sean Pearce, a former fire official who played an instrumental role in organizing the fire demonstration. “Today’s technology allows these families who usually vacate their homes in the winter to turn off their home water without compromising the fire sprinkler system. This could not be done 10 to 15 years ago.”

Developers can better protect property and families by making fire sprinkler systems the standard in new builds and retrofits.

“It took a lot of combined effort between city safety codes officers, contractors, developers and more to make this community and demonstration come to fruition,” said Pearce. “While Livingston is the first community to make fire sprinkler systems standard in all buildings, it is our hope that it won’t keep the title of ‘only’ for long, as sprinklered buildings are safer for families and first responders.”

For more information on how BlazeMaster CPVC fire sprinkler systems can protect your investment and cut costs on your next development, contact our team of piping systems consultants today.