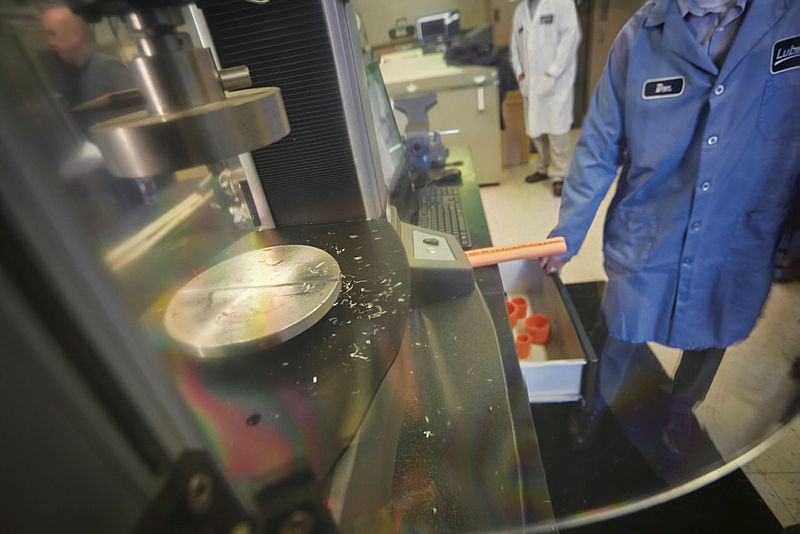 BlazeMaster® CPVC is designed for decades of reliable use in fire protection systems around the world. But when issues occur in the field, we want to know exactly what went wrong so we can help our customers prevent problems in the future. It’s a value-added service that also helps our customers know the facts so they can respond to any claims that may arise from a leak or other failure.

Our team of experts in chemistry and engineering routinely solve the mysteries behind a pipe failure. They’re like forensics investigators in the TV show CSI – except instead of solving crimes, they’re solving system failures. To get to root causes, BlazeMaster CPVC’s state-of-the-art failure testing lab is equipped with resources that are unsurpassed in the industry – and some equipment exceeds even that of outside third-party laboratories.

In supporting our customers, our failure analysis lab gives BlazeMaster CPVC a significant advantage over competing brands that may not offer testing beyond a rudimentary physical review. It’s not enough to say “it failed because there are chemicals on it.” We can determine the exact chemicals that may have caused a failure and offer suggestions as to where they may have come from so the installer or building owner can change their practices, all of which makes BlazeMaster CPVC the trusted choice for fire protection systems.

How We Do It

The process starts when we receive sections of pipe or fittings, typically from the product manufacturer. It helps to have information about how and where it was installed and any materials or chemicals that may have been in contact with it, such as insulation, wiring and pesticides or mold inhibitors that may have sprayed in the building.

The physical exam may also include cutting apart the pipe or fitting to examine the fracture surfaces. Our team is adept in the science of fractography – the study of how surfaces break. If a closer look is needed, the team uses top of the line microscopy that can magnify to 200x and render 3D images for detailed looks at pipe surfaces. If our team needs even better resolution, they can turn to a scanning electron microscope that magnifies up to one million times. This can often help our scientists understand the cause of the crack, such as damage from impact, improper cutting or the presence of chemicals.

If our scientists suspect chemicals are involved, they can access the lab’s advanced research tools that include:

In the hands of our experts, this technology is put to work to solve challenging puzzles. For instance, the lab received pipe from a fire sprinkler system that had started cracking after seven years in service. After testing, our team noted that a firestopping caulk containing an incompatible plasticizer had been applied to the pipe. But our experts had a hunch there was more to it; these materials typically require other contributing factors to cause cracking.

So we analyzed a few more clues to help our team crack the case:

After in-depth failure analysis, including FTIR, our team determined that use of the caulk on top of wet cement joints had caused the plasticizer to be to be extracted into the cement and mobilized into the plastic surface by the solvents in the cement. The firestopping caulk had also covered over some of the wet cement, inhibiting evaporation of its solvents, weakening and stressing the CPVC beneath. This combination of factors led to cracking of the CPVC material in areas where both cement and firestop had been applied.

Beyond identifying the cause of a specific issue, findings such as those in this case can be used to prevent future problems for others. We use results from the failure testing lab to update our installation instructions and guidance to the industry as well as the chemical compatibility recommendations available through our FBC™ System Compatible Program, which applies only to Lubrizol CPVC. This guidance can help an installer or contractor to advise a building owner to switch pesticides that might get on the pipe.

Failure analysis is just another part of Lubrizol’s never-ending commitment to building the confidence of all who use BlazeMaster™ CPVC. Our experts are always here to help if you have any questions or need help with installation best practices or chemical compatibility.