Like other piping materials, BlazeMaster CPVC expands as temperatures rise and contracts as temperatures fall. That means that the pipe will get longer in warm temperatures and shorter when it’s colder, which creates stress on the pipe that can lead to premature reliability issues.

For example, a pipe constrained at both ends will be stressed as it expands when temperatures rise. Eventually, the pipe may crack or break, creating a leak.

The good news: It’s relatively easy to avoid these problems by designing the fire protection system to compensate for expansion and contraction. Here’s a four-step process:

1. Determine how much a pipe will expand or contract

Multiply the coefficient of thermal expansion by two factors:

Here’s the formula to use:

∆L – Change in length of pipe due to change in temperature (in.)

∆T – Change in temperature (oF)

You can find detailed charts on thermal expansion in inches and centimeters on our specifications page. In addition, you can download our free Thermal Expansion Calculator to help you better understand the linear expansion of BlazeMaster CPVC and design around compression stress issues. 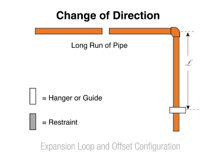 In most cases, changes in direction of the pipe run (Figure 1) will alleviate temperature-related stresses on CPVC pipe. The elbow and adjoining pipe at the end of a pipe run allows for enough movement. If the adjoining pipe is long enough, thermal expansion and contraction can be accounted for by placing a hanger or guide a defined distance away from the elbow.

In some situations, expansion loops or offsets may be required when installing long, straight runs of pipe.

As shown in Figure 2, an expansion loop creates a U shape. The opening of the U narrows for expansion and widens for contraction.

This technique should be used when designing the layout around fixed structures (Figure 3). As temperatures rise, the top and bottom elbows will flex inward. In lower temperatures, the vertical pipe will flex outward.

An effective design using these deflections must address factors such as:

These factors are essential to calculating loop length. Use this equation:

E – Modulus of elasticity at maximum temperature (psi or kPa)

∆L – Change in length due to change in temperature (in. or cm.) 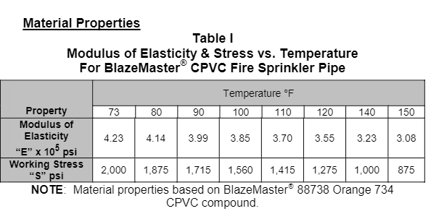 When designing the system:

With this process, you can ensure the fire protection system to flex as needed to accommodate thermal expansion and contraction.

to help you though this process. As always, if you have questions about upcoming projects – repairs, cut-ins and anything else – technical